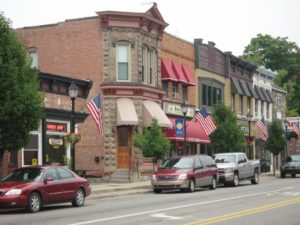 South Lyon was originally established as an agricultural center built around two railroads and incorporated as a city in 1930. It is located is the southwest corner of Oakland county and spreads over approximately 88 square miles. The South Lyon area includes New Hudson, parts of Green Oak Twp, Salem Twp and Green Oak Twp.

South Lyon allows you to easily access the awesome 10.5 mile Huron Valley Trail which extends along the former Grand Trunk Railroad from the City of South Lyon, through Lyon Township and into Milford Township, then south on Old Plank Road to Pontiac Trail, and east on Pontiac Trail along the north side of Lyon Oaks County Park to the Wixom City boundary. The trail has a mile of frontage along Lyon Oaks County Park. An extension to the west goes through the Lyon Township Park and along Grand River Avenue into Island Lake State Recreation Area, where it crosses under I-96 to connect to the trail system in Kensington Metropark. The Huron Valley Trail provides direct access to McHattie Park, Volunteer Park, James F. Atchison Memorial Park, Lyon Oaks County Park, Kensington Metropark, and Island Lake State Recreation Area.

A few special highlights of the area are the Witch’s Hat Depot Museum and Historic Village which includes The Little Village Chapel, Freight House, Washburn school and a recent gazebo addition. In 1976, the Witch’s Hat Depot was moved from its original location on East Lake Street to McHattie Park and it now serves as the focal point for the historic village.

The Center for Active Adults is an integral part of the community and provides services and resources for area adults and their families. The senior program is available for those who are age 50 and over and offers a wide range of enrichment, educational and recreational activities.

The newly expanded The 15,000 sq. ft. Salem-South Lyon District Library opened for business on May 2, 1998. It is a beautiful facility located on the south end of South Lyon. The library hosts a number of programs for adults, teens and kids, ranging from computer programs to story times.

Overall, South Lyon is a great place to call home!